The bloodless revolution: What does ‘peak vegan’ look like?

As the world turns its gaze towards a net zero future, one issue is sure to be controversial: meat.

Despite scientific consensus that we need to eat more plant-based foods to cut our carbon footprint, not everyone is onboard.

At Cop26 this week, 60 per cent of the food served to conference-goers was reportedly meat or dairy. Critics likened it to “serving cigarettes at a lung cancer conference”.

However, change is afoot. There’s an old phrase by a French essayist: “Like Saturn, the revolution devours its children”.

Over two centuries later, another revolution is in motion – but instead of devouring infants, it’s all about eating less meat.

I ask Derek Sarno, co-founder of the vegan brand Wicked Kitchen, if he thinks our diets are going through a time of upheaval.

“Definitely,” he answers. “It’s just a rising up of something.”

“Every single reason is a good reason to eat more plants.”

Henry Dimbleby, author of the National Food Strategy, says the UK needs to slash its meat consumption by 30 per cent to reach net zero by 2050.

That move will be contentious – but beneath the sound and fury, the wheel of revolution has been quietly turning for years.

An Oxford University study last month claimed that the amount of meat in people’s diets had dropped 17 per cent since 2008.

Some think you only need to look at supermarket shelves to see the difference.

“There’s so many things that if you look back four years ago, there was none of that,” Sarno says.

As Tesco’s head of plant-based innovation – though he stresses that he’s speaking for himself, not the supermarket – he knows what he’s talking about.

“2018 was a ground-breaking year where Tesco really led innovation in the whole plant-based space,” he claims.

“We were the first brand to launch a range of, you know; ready meals, pizza, salads, sandwiches and fresh chilled food.

“Nobody, nothing was in the market, except for a falafel sandwich, maybe a salad.”

He joined Tesco a year earlier, and was responsible for getting the grocer to sell products from companies like Beyond Meat.

“They went national in the US and so it only seemed logical to come and bring the best brands,” Sarno, who was born in New England, explains.

This might have been progress from the days of nothing but Linda McCartney, but supermarkets still had some catching up to do.

They were secretive about the sort of food they were selling until very recently, argues Will Nicholson of The Food Foundation.

“In 2018, we didn’t really see any companies apart from one or two with some healthy food sales targets,” he explains. 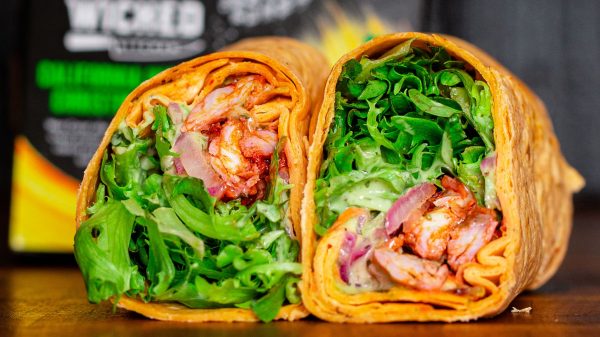 Today, Sainsbury’s and Tesco report the proportion of protein sales that come from plants and plant-based food – 10 per cent and 12 per cent respectively.

Nicholson continues: “In a few short years, we’ve gone from nobody reporting on anything to do with protein, to… big supermarkets disclosing the protein split, and one having a target for plant-based [products].”

That supermarket is Tesco – again – which has committed to quadrupling its sales of vegan foods by 2025. In some ways, it shows just how far grocers have to go.

First of all, it’s the only supermarket to issue this kind of pledge. Secondly, it still isn’t explicit about reducing meat sales to reach its goal of net zero by 2050.

“Businesses don’t want to go there,” is Nicholson’s diagnosis. “It’s kind of the last taboo.”

He understands why companies are cautious: “upsetting customers, getting caught out setting a target where you fail to meet, losing market share.

“It’s hard to get to the point where we’ve grown up enough to talk about eating less meat, without people feeling like they’re living in a nanny state.”

Few things prompt accusations of a nanny state more than suggestions of a meat tax.

When a levy was suggested a few weeks ago in a net zero research paper by the government’s Nudge Unit, the Business Department gave a hefty shove in return.

“We have no plans whatsoever to dictate consumer behaviour in this way,” a source told the BBC.

The research was later deleted from the government website.

Some fear that a tax could creep up the supply chain and eventually hit poorer shoppers in the pocket, while even Henry Dimbleby has reportedly warned that it could cause riots.

Sarno thinks the policy would “work well”, pausing again to say he’s speaking for himself – “not for Tesco”.

However, he puts more stress on the need for flexitarianism: eating meat occasionally, but much less than we do now.

For Sarno, “peak vegan” is a myth – whatever the vegan version is of a wild goose chase – and Nicholson agrees.

“At the moment, it’s been presented as a little bit of a binary thing that you have to do without meat,” he believes.

Not so long ago it meant Parisian mobs storming the Bastille, now it’s just picking up a different sort of burger now and again.

Of course, spreading that behaviour across a population is much trickier.

That’s the challenge facing supermarkets, the government, and – if Dimbleby’s net zero calculations are correct – everyone.

The wheel of revolution is moving, but how far will it go? And can it turn faster than the climate changes?

Sarno remains confident. “People are curious, they want to try some of these products,” he says.

“I don’t think we’re even close to peaking.”