Waitrose and Lidl have topped the Which? sustainability rankings in the first report of its kind from the consumer watchdog, which looked at greenhouse gas emissions as well as plastic and food waste.

The supermarkets which share top spot in the sustainability rankings came from different ends of the grocery spectrum, with no-frills discounter Lidl and high-end grocer Waitrose both scoring 74%.

Asda and Sainsbury’s tied in a respectable third place, just 3% behind the leaders, while Iceland came last, according to the research. 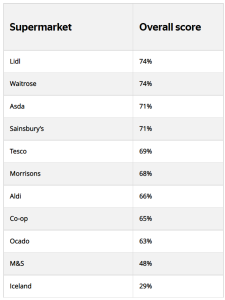 The Which? supermarket sustainability rankings in full.

Which? collected hundreds of pieces of data, before analysing them to compare the sustainability of the UK’s eleven biggest supermarket chains. The study of eco-friendly grocers tracked supermarket policies on plastic and food waste (shoppers biggest concerns) and greenhouse gas emissions (which most experts say poses the greatest environmental threat).

Lidl performed well thanks to its low GHG score (how many tonnes of carbon dioxide equivalent it emits per million pounds of revenue) and its aim to become carbon neutral this year. It also scored well on plastics, with much of its own-brand plastic easily recyclable. It did less well on food waste.

Waitrose scored well across the board, with reasonable GHG and food waste scores. It also uses the least plastic compared to the number of items sold.

The Which? report partly attributed Iceland’s low score to its business model. It performed worst on greenhouse gas emissions by some margin, which may be “due to the high proportion of frozen food it sells” and the energy taken to keep it cold throughout the supply chain.

Iceland also uses the most plastic relative to the number of items sold, while its relatively average score for food waste resulted in a total score of just 29%.

There were also clear frontrunners across each of the metrics Which? uses to create its report.

Aldi and Lidl achieved the lowest GHG emissions, the Co-op topped the plastic rankings and Ocado came top of the food waste table. The Co-op, Aldi and Lidl waste more than twenty times as much food as Ocado, proportional to their food sales.

“We know that consumers increasingly want to shop sustainably and our in-depth analysis of three key areas shows that all the big supermarkets could be looking to make some improvements,” said editor of Which?, Harry Rose.

“The good news is shoppers can make a big difference themselves by adopting more sustainable habits, such as buying loose fruit and vegetables, buying seasonal local produce, eating less meat and dairy and limiting their own food waste.”