“As a brand and business, we have a very important role to play in helping change consumers’ behaviour around the environment and the climate crisis,” Innocent Drink’s group marketing director Kirsty Hunter told Grocery Gazette.

“We can’t be too scared to act. The last thing we want is a situation when none of us do anything.”

Earlier this week, Hunter was at London’s Trafalgar Square with managing director of UK and Ireland, Sam Akinluyi, who joined the FMCG giant just 10 months ago, having previously held senior positions at Nestlé, General Mills and Mars.

The pair were unveiling the company’s new ‘The Big Rewild’ campaign, in partnership with The Orchard Project. As part of the collaboration, the iconic landmark was transformed into into a lush, green meadow for one day only to promote the launch of Innocent’s new ‘carbon neutral’ orange juice.

On Innocent’s The Big Rewild campaign

“The Big Rewild is the launch of what is essentially a three-year campaign,” Akinluyi told Grocery Gazette.

“We are committing to create nurture, to preserve two million hectares of land by 2025. We’re really excited about it!”

To give an idea of the scale of Innocent’s project; two million hectares is roughly the size of Wales. 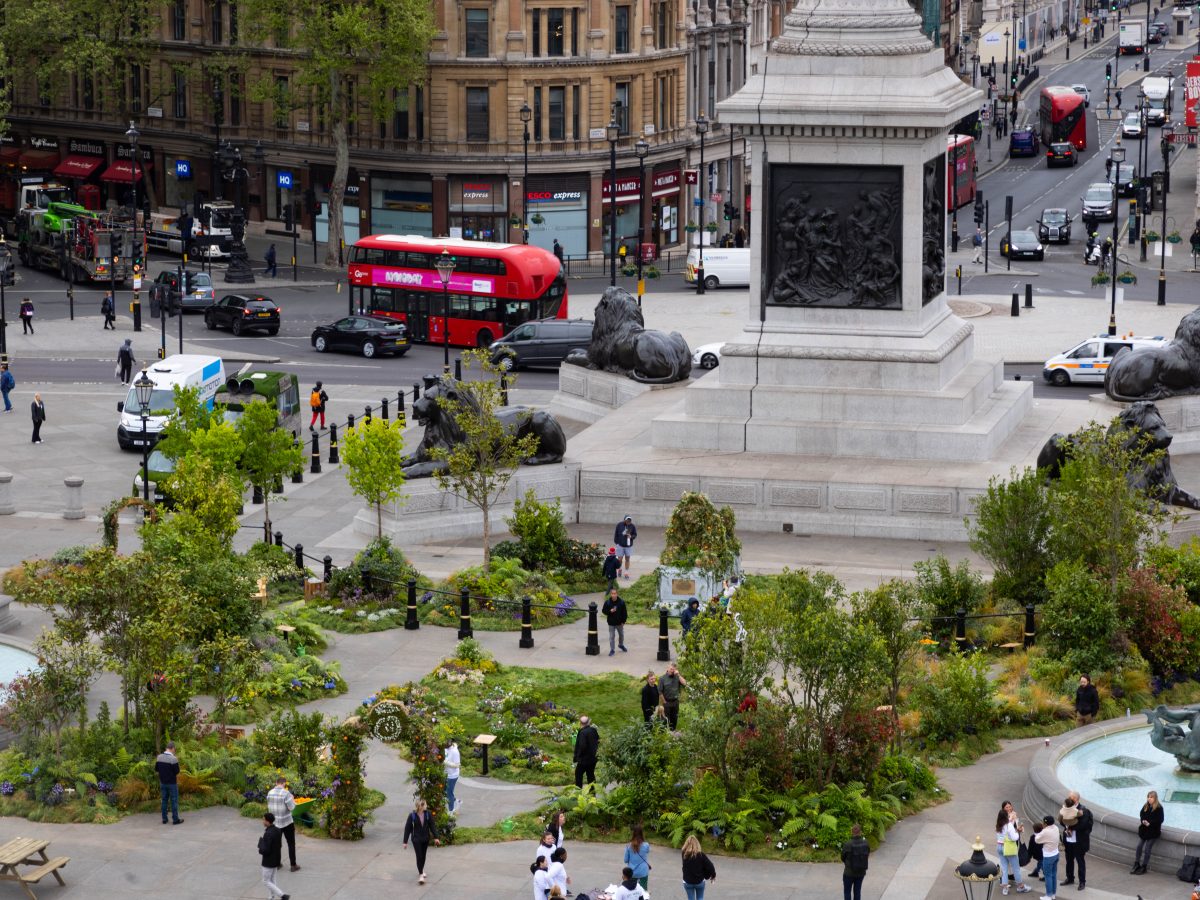 The rewilding campaign has launched as the company debuts its new ‘carbon neutral’ orange juice and will be taking place right across Europe. In the UK, the team will be working primarily to restore city orchards throughout the country.

“We’re going to do things in Manchester, Swansea and Glasgow – and it’s all based around this concept of re-wilding urban spaces in a bid to bring nature back to places where it’s probably gone, or is dwindling,” explained Akinluyi.

“We’ve chosen Trafalgar Square because you don’t often see too much green there. But today, we can see what’s possible, in a location that should be almost impossible to rewild!

“We’re launching this as just one part part of our whole campaign focusing on on climate change – we think it’s important to talk more about that.”

On the new HFSS regulations

The upcoming HFSS regulations – which restrict the advertising and promotion of foods which are high in fat,sugar and salt – are being introduced by the UK government this October to help hackle obesity.

According to Akinluyi and Hunter, all Innocent Drinks will be exempt from the ruling as the smoothies are essentially just “fruits with nature in a bottle”.

“If we we’re a chocolate company, we would need to do a lot more to prepare,” Akinluyi said.

“I think we have to see it as an opportunity to talk about the natural nature of our products,” he continued.

“Yes, we’ve got naturally occurring sugars – but the great thing about fruit is that there’s also fibre, potassium, nutrients and vitamins as well. I think there’s more of an opportunity to talk about the benefits of things like juice, as opposed to think about the impact it might have on display and advertising. Those aren’t impacting us.”

However, Innocent was not exempt from a ruling issued by the Advertising Standards Authority (ASA) earlier this year, as one of its adverts was banned following 26 complaints.

The advert, which encouraged customers to “get fixing up the planet” by choosing its drinks was banned by the advertising watchdog. It said that many customers could interpret adverts to mean that buying Innocent products would have a positive environmental impact.

It also noted that Innocent drinks bottles included non-recycled plastic and that the extraction of raw materials and subsequent processing of those materials in order to produce the bottle would have a negative impact on the environment.

Reacting to the ruling, Hunter, who has been with the company since 2020, said: “For us, it just really highlights that this is a really complex space and there’s lots of different opinions and views on it.

“From the moment when we first came up with the idea, through to the ad campaign, right through to the complaint, and then even the upholding of that, some of the advertising guidance has changed.

As a result, Innocent is particularly keen to make sure that it does work with other brands and regulators within this space to get a common framework and governance around advertising and promoting positive change and action for the environment.

“We genuinely believe we, as both a brand and business, have a very important role to play in helping change consumers’ behaviour around the environment and the climate crisis,” Hunter added.

“We can’t be too scared to act. The last thing we want is a situation when none of us do anything.”

“From the Suez Canal, to impact of Covid-19, to the unfortunate conflict that we’re seeing in Ukraine at the moment. It’s been very tough and what it means is a level of unpredictability,” Akinluyi said. 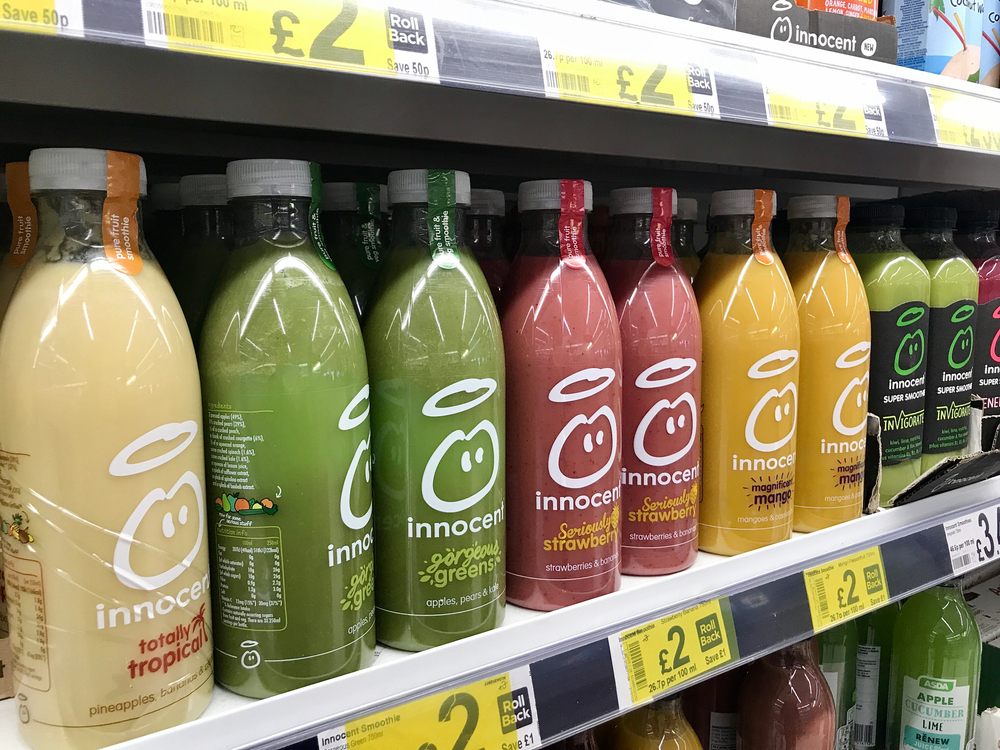 “Yes, we’re seeing rising costs, like everyone else. So what we always try to do is make sure that we are as as lean as possible, while not compromising what our consumers get. That means constantly looking at how we work and what and what we do.

“It’s been a very tough period of probably 18 months to two years for us when it comes to inflation. And obviously it’s hitting all of us in our pockets. So we are always mindful of our products, ensuring that people know the value they get from us is really important.”

When asked if the current climate will impact the prices of Innocent’s products, Akinluyi said “you can’t ever say no – but we always have to be looking at our cost base and protecting our infrastructure.”

Last month, Innocent’s social media was plastered with memes, images and brand conversations about a certain image, which had been posted on the brand’s Instagram page.

Our boss has accidentally changed our Instagram profile picture to one of their wedding photos.

FINALLY A MISTAKE THAT WASN'T US. We've been waiting years for this. pic.twitter.com/7cnCWsthao

“It came out of an error after someone accidentally uploaded the image,” said Akinluyi.

“We thought, right, let’s just go with it! Let’s see if we can do our Innocent thing of talking to people about the mistakes we’ve made and emphasise the fact that we’re not perfect.”

Akinluyi revealed that it’s not the first bit of Innocent marketing which started out as a mistake.

“There are so many things that we’ve done – especially those which have gone the most viral – because these things just naturally come out of some of the people in the team or some of the mistakes that have happened.