Automation and inflation: What will 2022 mean for supermarkets?

As supermarkets reopen after Christmas for the final days of 2021, bosses will be looking towards another seismic year.

Grocery innovation has been shunted forward by the pandemic, spurring changes in e-commerce and automation that seemed futuristic just two years ago. According to insurance company Euler Hermes, we’ve seen about five years of progress squashed into one.

Not all change is progress, though, and the spectre of soaring inflation feels like a throwback to the “Winter of Discontent”. For most supermarkets, 2022 will mean maintaining a fiddly balance between cost pressures and tech investment.

Looking forward, the grocery sector is set for another year of upheaval. But as the big players have found, it could also mean opportunities for those who play their cards right.

Whatever you think about the shift towards till-free shopping – and it has plenty of sceptics – it’s expected to really take root next year.

Amazon fired the starting gun in March when it opened a “Fresh” store in Ealing, and since then has launched another 12. If internal documents are to be believed, it will unveil 60 more in 2022.

Spooked by the tech titan, other supermarkets are getting into no-frills, no-tills retail. Holborn has found itself in the middle of a turf war, with Amazon, Tesco and Sainsbury’s opening shops within yards of each other.

What’s next? Next year, Morrisons could get in on the act and take the fight to its Big 4 rivals. It’s currently trialling the till-free tech, from Israeli firm Trigo, at its head office in Bradford.

The turf war could transform into a civil war, as Amazon shifts its attentions outside London and Sainsbury’s and Tesco try to keep pace. So far, “frictionless” shopping has been confined to convenience stores: if any superstores are on the horizon, the results will be fascinating.

If your Christmas dinner the other day seemed a bit more expensive, then you’re not alone. It’s 3.4% pricier than last year, costing a family of four – on average – £27.48.

Data from early December shows food prices are increasing faster than at any point since November 2020, more than doubling in a month. If inflation keeps going at this rate, then something’s going to burst.

It’s a consequence of how rising wages (from labour shortages) and material costs have forced their way up the supply chain. As prices soar, wages need to increase to keep up, creating a cycle more vicious than the final stage of the Tour de France. 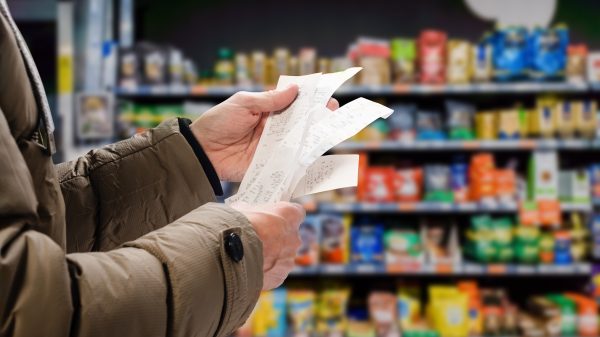 Forecasts show that food inflation is gathering pace, not slowing. Some experts, including Food and Drink Federation boss Ian Wright, think it could hit double digits.

“How can it be right that a whole chicken costs less than a pint of beer?” Ranjit Borporan, founder of supermarket supplier 2 Sisters, said in October. “You’re looking at a different world from now on where the shopper pays more.”

Perhaps 2022 will be the time when that different world becomes an everyday reality.

READ MORE: Roboshop: Is Ocado the future of supermarkets?

The shop floor is seeing a revolution through till-free shopping, but another one is going on behind the scenes – but this time in the back rooms and boardrooms.

Grocers threw themselves into e-commerce during the pandemic, but in doing so didn’t have time to think about balance sheets or profit margins. The ground had shifted under their feet and all they could do was protect themselves from the fall.

But in adapting so quickly, retailers have found themselves in another crisis. Picking and packing groceries is pricey and will eat into their profit margins – around £246 million for every percentage point that e-commerce increases its share of the market, by Euler Hermes’ calculations.

The answer? Automation. Jefferies recently called Ocado, which relies on a network of automated warehouses, the “partner of choice” for supermarkets hoping to ride the wave of online shopping.

Another option is micro-fulfilment centres (MFCs): robots that can pack groceries in the back room of a supermarket, like a giant vending machine. “Grocery retailers in the UK have started to think of this as a major strategy for their next year,” tech expert Max Hammond recently told this publication.

It’s more likely that supermarkets will opt for MFCs, given that Ocado is a rival and accounts for 1.8% of the grocery market. Whichever way they move, though, automation will only be getting bigger over 2022.

If all goes to plan, supermarkets could be healthier places by the end of next year. In October 2022, as part of the government’s anti-obesity drive, retailers will be banned from multibuy promotions on junk food.

Again, that’s if all goes to plan. That date has already been knocked back six months in what critics labelled a “huge industry lobbying attempt”, and a recent survey showed nine in 10 grocery bosses want another six months – at least.

Some progress has already been made, but there’s an awful long way to go. Sainsbury’s has already banned these offers, but its Big 4 rivals are still running hundreds of them every week. Expect a gradual shift over the next year.

That’s not to say everything is sweetness and light and low-calorie celery sticks. Grocers are pivoting towards other promotions on unhealthy foods, like meal deals. Over five weeks this summer, the Big 4 ran more than 20,000 promotions on products laden with salt, fat or sugar.

However, the red lines being redrawn will box supermarkets in when it comes to flogging junk food. 2022 might not transform Britain into a healthy panacea, but it’s a step in the right direction.