If you indulged a little too much in festive drinking and fancy a change, or want to continue your dry January journey, the UK’s first alcohol-free off-licence may just be your answer.

Located in London’s West End, the unique store is run by former Islington Liberal Democrat councillor Laura Willoughby MBE. She founded Club Soda to help individuals with mindful drinking, which was stemmed from giving up alcohol herself a decade ago. 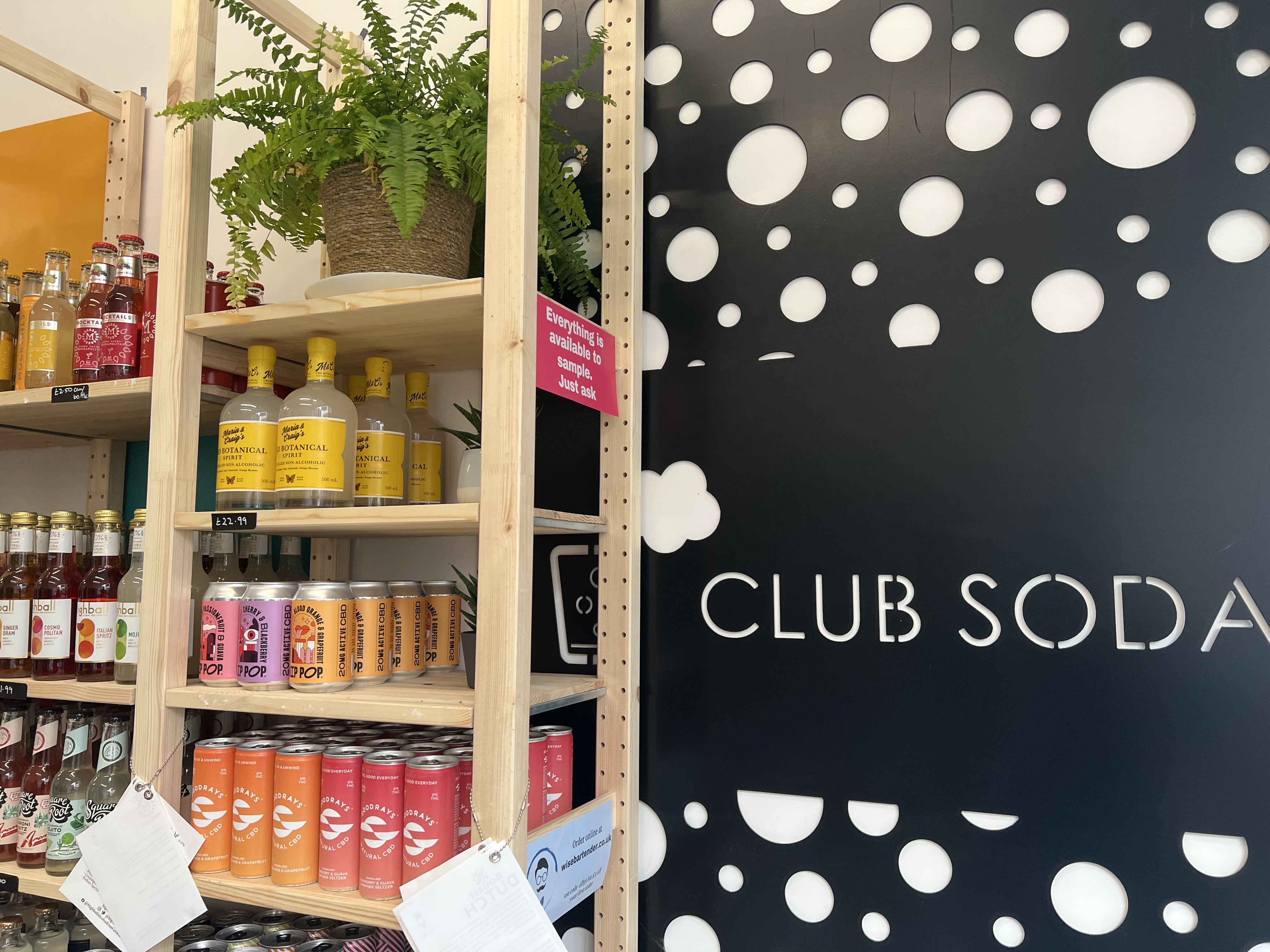 Now, the “exciting, experiential and tasty” off-licence, which initially started as a month-long pop-up has extended its stay until the end of February, offering zero to alcoholic drinks, ranging from beer to spirits and even featuring some well-recognised brands.

“In an ideal world, we would not even exist,” Willoughby said as we sat in the meeting room of the Great Portland site. “My aim is not to exist, I want retailers across the country to have a good low and no section.”

Despite being dubbed as a non-alcoholic off-license, in any other store customers would still be age ID’d for some of the same beverages, with Willoughby making it clear that this is not a “soft-drink store, this is an adult alcohol-free store.”

“Sampling is a key part of what the store is about”, she said. “It’s not enough to simply have these drinks on the shelves and say ‘here look at that pretty label’.”

“There’s a whole piece of education here; to let people taste flavours, understand how to drink the drink and think about how they can fit it into their diet.”

At the time of visiting, the store had been re-merchandised just the day before. Now shelved by type of drink, instead of by brand, it is no surprise that no-one who visited and sampled a few drinks left without purchasing something. This was partly down to the help of the friendly workers, who clearly knew a lot about what was being sold.

“We see a very diverse amount of people visiting, from people who don’t drink for religious reasons all the way through to people like me, who are an idiot like me who have given up now,” Willoughby added.

According to the ex-Lib Dem councillor, the average basket spend equals to around £35 per person. However, it all depends on the alcohol alternative being bagged, whether that is a couple of cans of beers, champagne, cider, spirits or even the new CBD range.

“The biggest buyers of alcohol-free drinks are people who still drink alcohol, so that shows there is a huge move to moderate drinking in the UK. People are looking to replicate those experiences, occasions, rituals and adult flavours, but with alcohol free drinks.”

At the non-alcoholic off licence, Caleno Dark & Spicy Tropical Non-Alcoholic Spirit retails at £18. It’s a similar sounding and tasting equivalent to Captain Morgan’s Spiced Rum, which retails for £16 in supermarkets. 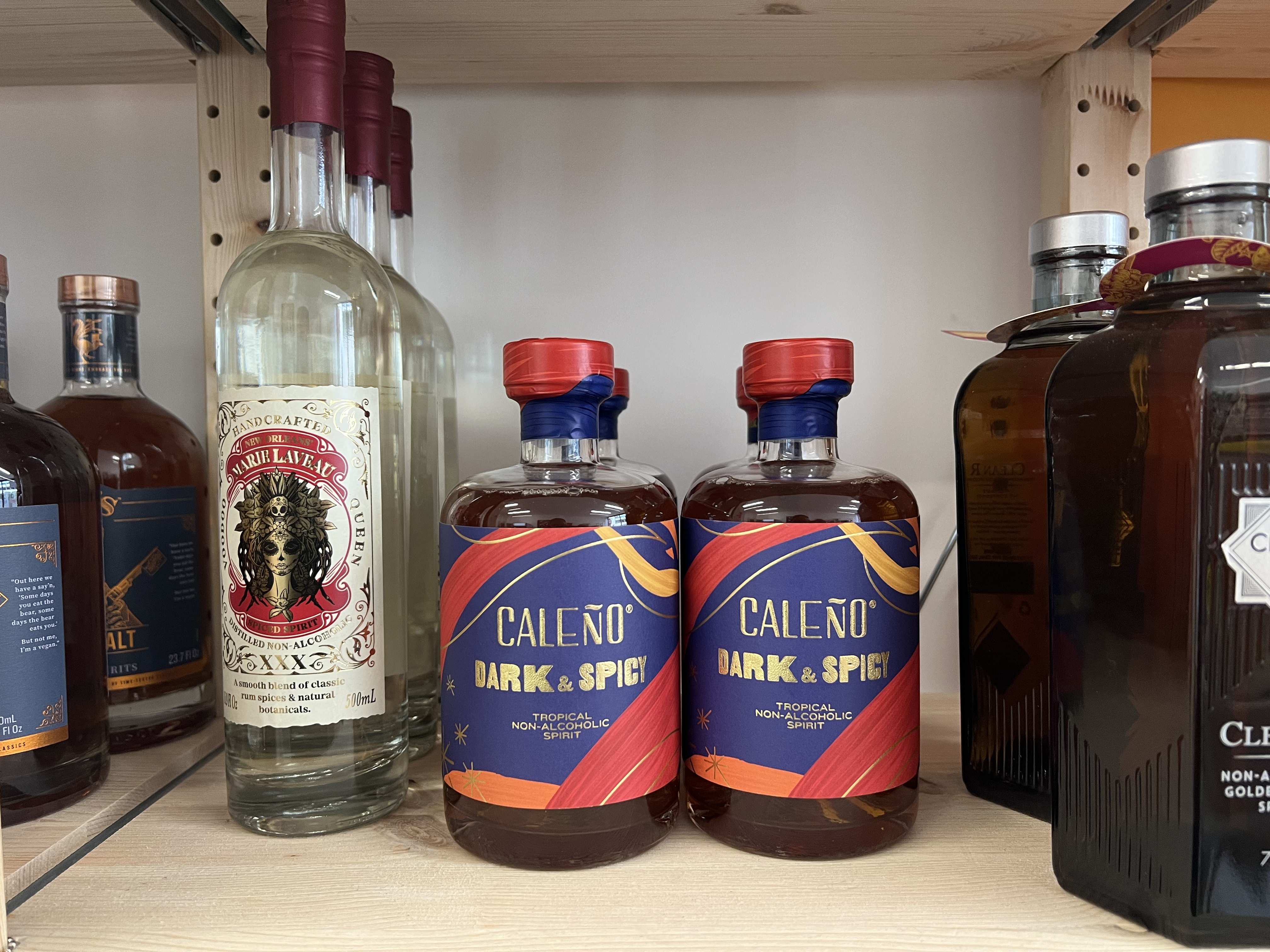 “We’ve had people travel down from Edinburgh, to spend time in the shop,” Willoughby continued. “The average time in store is around half an hour. People are curious and want to try before they buy, which we allow. We offer samples of every single one of our drinks on display.”

Regarding sustainability and waste, Willoughby revealed that the company is applying to become a B Corp and its in its final few stages.

“Sustainability is so important to us,” she adds. “That’s why we wash up so many polypropylene glasses to reuse.”

Assistant store manager, Charlotte Brown jokes that she used to have soft hands, but not anymore due to the “constant glass washing”.

Once a drink is opened for a customer to sample it is left out in a bucket of ice for use throughout the day. Of course, champagne, bottled beers and spirits are easier than cans of beer to reuse and store again. 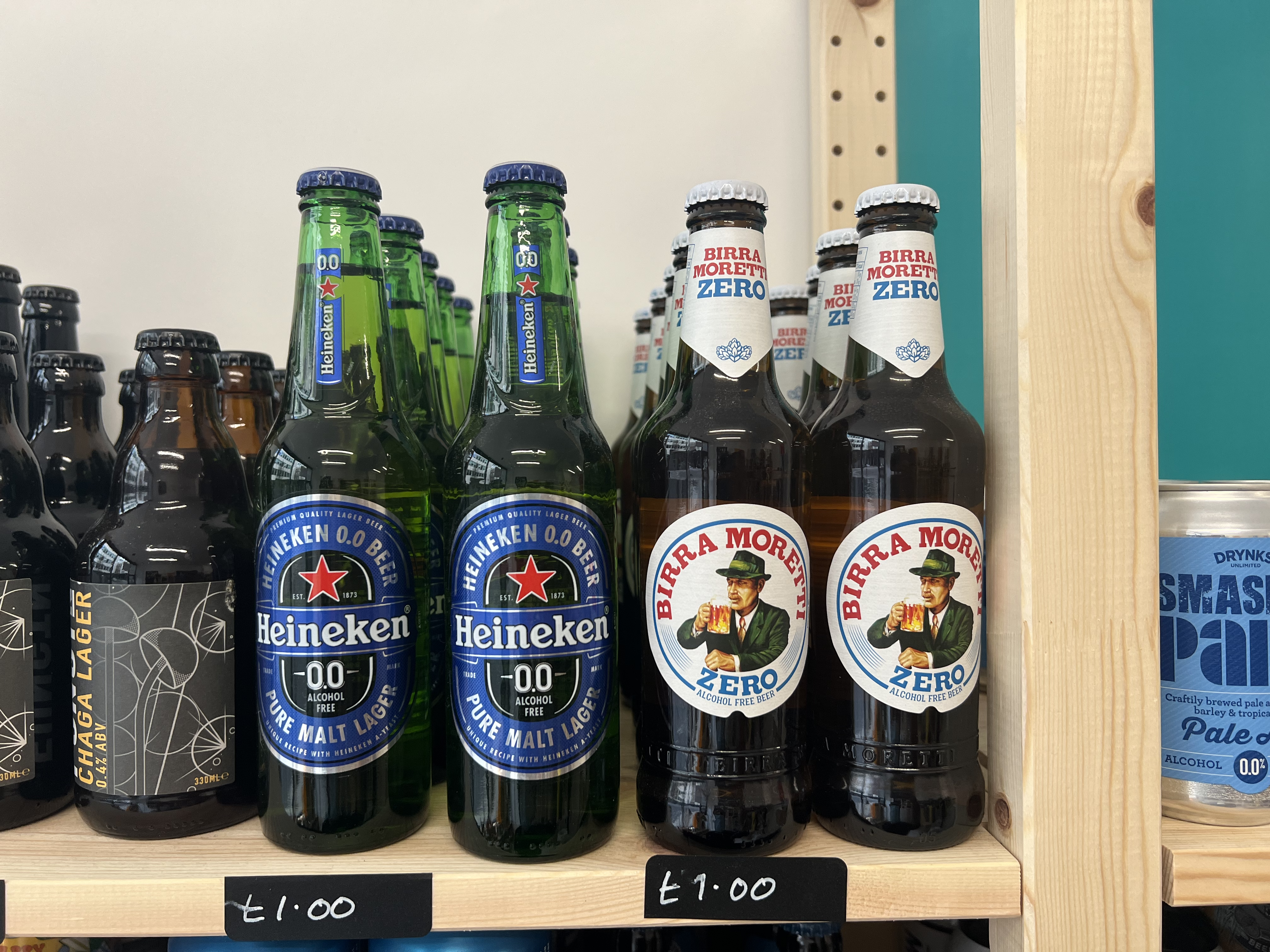 Beer drinkers tend to not bother sampling as much as they are lower in price, according to Willoughby. As a result, customers will pick up a few cans, try them at home and come back to grab their favourite.

To help combat any waste, the store has a few beers on tap, although Willoughby cheekily adds that she drinks a lot of beer at the end of the day, if some are left. She is keen to point out that’s she’s not complaining as it helps her to know the products a little bit more.

When asked if alcohol-free off licences are the new future, Willoughby replied her aim is to put the store out of business.

“In the short term, I think there is great demand for alcohol free pop-ups, but I don’t think they need to be there as a permanent and solo fixture.

“My aim is to make sure every single shop in this country has a good range of alcohol-free options, so people have the choice wherever they go and wherever they live.”

She added: “If we were to have a permanent store or create some elsewhere it will be more than selling alcohol alternatives, but more educating retailers and consumers by creating a mindful drinking hub, where people can learn more.”