Prices for fast-moving consumer goods (FMCG) have increased by 6.9% across Europe over the past 12 months, rising to 7.5% in the UK, according to the latest data from NielsenIQ.

The new data – which has measured prices for the 12-week period ending 24 April 2022 – has revealed the extent of inflation seen across the European market.

It shows that – while consumption remains impacted by “multiple variables including supply chain disruption and geopolitical instability” – inflationary pressures are becoming increasingly important across the globe.

Of the 32 European markets monitored, more than eight FMCG categories out of 10 showed increasing inflation rates during the 12-week period, versus the same period in 2021.

Essential goods were the most affected by inflation, with perishable food, ambient food and pet food seeing the biggest price rises across the European markets surveyed (8.8%, 8.7% and 8.6% respectively). 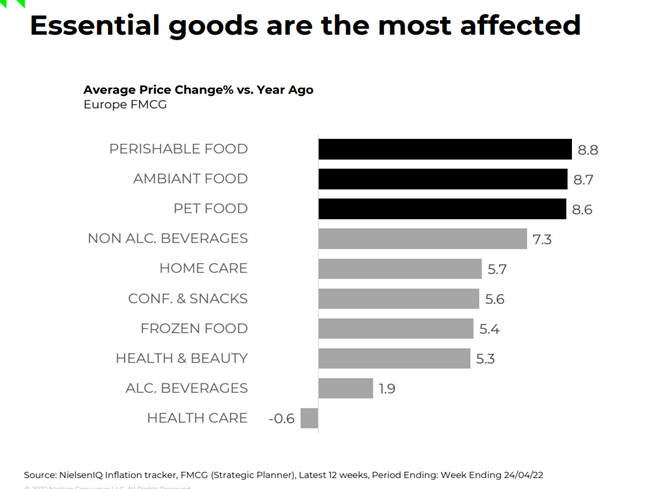 Year-on-year inflation is now over 10% higher in several markets from Northern and Eastern Europe, with Turkey, Sweden and Ukraine seeing the steepest inflation hikes compared to the same period a year ago (69%, 47% and 22% respectively).

The data also reveals that the increase in FMCG promotional activity see in 2021 (28.2% of sales were made via promotions vs 25% in 2020) has not been sustained. Some 58% of European countries have reduced the number of items on promotion over the past year.

NielsenIQ’s latest UK Total Till survey – released earlier this week – showed that while inflation is now helping to lift category growths across most of the store, volume sales were in decline in all FMCG categories at the UK supermarkets for the four-week period ending 18 June 2022.

The data showed that rising prices are causing shoppers to consider cheaper meal alternatives, with sales of cheaper frozen and canned goods showing an increase of around 10%. Sales of dry pasta also increased, by almost a third (31%).