Co-op named the ‘worst’ UK supermarket in Which? annual survey

The Co-op has been named the worst UK supermarket for the second year running, in the annual survey from consumer watchdog Which?.

The convenience store was labelled UK’s least favourite supermarket after receiving a customer score of just 61%, with customers describing the symbol group retailer as “expensive”, “always crowded” and with “long queues at checkout”. 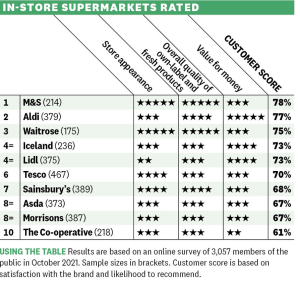 M&S topped the list with a customer score of 78%, receiving five stars for store appearance, customer service and the quality of its own-brand and fresh products.

The consumer group surveyed 3,057 members of the public online in October, with 1,304 also rating their online grocery shopping experience.

Last year’s winner Aldi received a customer score of 77%, and was the only supermarket to get a full five stars for value for money.

Respondents described Aldi as “cheap and cheerful”, but said it was often let down by long queues. There was also a strong performance from the UK’s other major discounter Lidl (73%), as consumers face up to the cost-of-living crisis.

Waitrose ranked third with 75% but, like M&S, suffered lower scores on value for money.

However, when it came to online grocery deliveries, Iceland was voted the best with a score of 76%, winning five stars for its availability of delivery slots and how easy its website or app was to use. 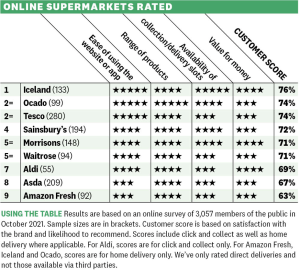 “Shoppers have chosen M&S as their favourite supermarket for a great in-store shopping experience and quality products,” said Which? magazine editor Harry Rose.

“But with the cost of living continuing to rise, many people are looking for quality at the cheapest possible price, and this is reflected by a strong showing in our research for some of the least expensive supermarkets.”

A Co-op spokesman added: “Which?’s results are based on a sample of just over 200 people but each week more than 15 million shoppers overwhelmingly vote with their feet and visit our community stores.

“They choose Co-op for quick and friendly service from our colleagues and to buy our award-winning food and drink and honest value range, which offers ethically sourced Fairtrade and 100% British meat products at a fair price to shoppers.”