Sainsbury’s has been named the supermarket which will add the most value to people’s homes around the UK, with an average increase of just under £40,000.

The relationship between house prices and local grocers was studied by CIA Landlords, whose research revealed which supermarket chains will add the most value to people’s homes. 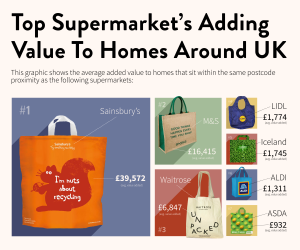 The study analysed how property values are affected by living in close proximity to specific supermarkets, with houses located close to a supermarket sometimes seeing prices increase by thousands of pounds.

Although living near to any supermarket adds value, living near a Co-op was found to be the least valuable, offering the smallest increase – just £388.42 on average.

The research found that most chains cause a house price increase of about £1,000, although houses living close to a branch of Sainsbury’s, Waitrose or Marks & Spencer will see property prices rocket.

Waitrose has long been considered the most desirable supermarket from a house price perspective – to the extent that a reflection of supermarket density onto the prices of real estate across cities in the UK is known as ‘The Waitrose Effect’.

“Our data shows that, although M&S and Waitrose do tend to boost house prices, Sainsbury’s comes out overall as the top supermarket to add value to the average UK home. We can see this most prominently in London, where living next to a Sainsbury’s adds on average over £43,000 to your home,” added CIA Landlord’s finance director, Richard Wayman.

“Why is this the case? Many people are becoming more wary of increasing supermarket shortages, as well as rising living prices, so living next to a more affordable supermarket may be preferable, and therefore lust-worthy, when looking for a new property.”

But with recent news reports showing significant price hikes across food prices and with the cost of living set to soar, UK house buyers may begin to place higher demand on homes closer to budget supermarket chains.